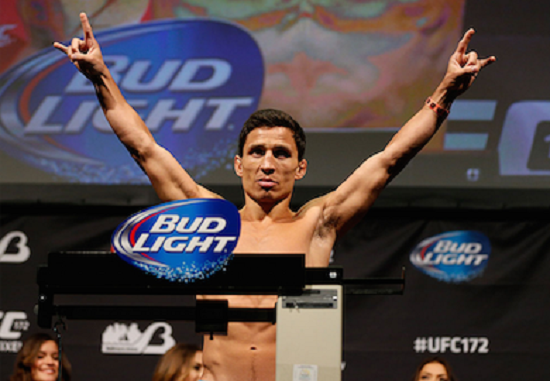 Joseph Benavidez is gearing up to fight Dustin Ortiz this Saturday at UFC Fight Night 57.

The bout is one that would extend Benavidez win streak to 2, and leaves the #2 ranked flyweight with a lot to lose against #13 ranked Dustin Ortiz, who is currently on a 2-fight win streak of his own.

For Benavidez, his ultimate goal is to work his way up to a third bout against Demetrious Johnson.

He spoke to MMAJunkie about his career if he never won a UFC championship.

“I’ll always be happy in the other things I’ve done and accomplished, so I’ll be happy. I’ll be unfulfilled because I know that I didn’t reach my goal and I didn’t do what I was really capable of. So there’s definitely that. But I know the way I am, and it’s not something that would eat at me, even though it does while I’m in it. (I’m beginning) to see there’s other things in life, and I can’t do this forever. Like after that, I want to have a family and people that love me and do other stuff. I wouldn’t let it affect me and my kids and be one of those crazy coaching dads or dancing moms.

“But there would definitely be a sense of un-fulfillment because I don’t think I’m delusional. I don’t know if other people are. There are some fighters that think, ‘I’m never going to be world champion, but this is awesome that I’m fighting professionally in the UFC.’ For me, I know I’m one of the best, and I was capable of that and didn’t do it. That would really be the disappointing part, I think.”