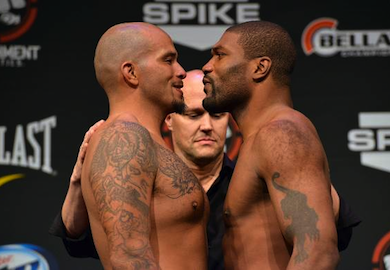 The Bellator MMA weigh-ins have been completed from The Social bar inside the Revel casino in preparation for Bellator MMA’s November 15th event, which will showcase MMA icon, Rampage Jackson’s Bellator debut, the Bellator Heavyweight World Title fight and the Bellator Featherweight Finals.

Bellator MMA will take place from Revel on Thursday, November 15th with the first fight taking place at 6:30 p.m. EST and streaming LIVE on Spike.com. The televised portion of the night will begin at 9:00 p.m. EST and will air LIVE on Spike TV.