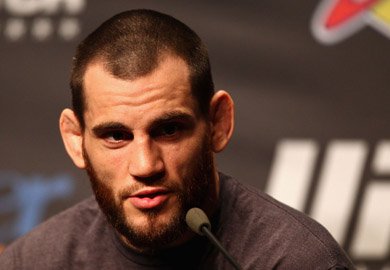 The recent release of arguably one of the best welterweights in MMA history to never hold a title in the UFC, Jon Fitch, shocked the MMA community and left UFC fighters out in the cold in the way of job security as the prospect of being released became very real.

The UFC stated that it was simple mathematics that led to the release of Fitch and 15 others this past week.

Now with Fitch becoming a free agent, he looks to find a foothold in an organization that will keep him under a dim spotlight, if any, so that the UFC gives him a call back in the future.

Unfortunately, Bellator CEO Bjorn Rebney stated to The MMA Report, that Fitch simply doesn’t fit in to their plans:

“I have a lot of respect for Jon [Fitch] and I have a lot of respect for anyone who has to courage to do what these guys do and the athletic ability to do what they do but we are not going to be signing Jon Fitch. We have a stacked welterweight division right now. We have a lot of guys that we are developing that we anticipate are going to be world class fighters and break the top ten. We want to keep guys busy. We want to keep guys inside the cage and we have a plan in terms of the next year and who is going to be apart of the tournaments and it’s just not the time.”

Bellator could very well have been Fitch’s second biggest payday behind the UFC, but with disconcerting news like this, Fitch will surely look to another promotion that at least has a television contract such as the World Series of Fighting or one of the various promotions that does business with AXS TV.

Either way, here’s to hoping the longtime welterweight contender finds his footing outside of the UFC.