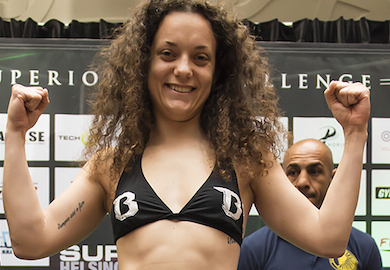 The roster additions continue for Bellator as the promotion has added the #6 ranked featherweight in the world as Annalisa Bucci (7-3) has joined Bellator and will compete in the United States for the first time in her career.

“I feel extremely honored, excited and thankful to be part of the first group of females, fighting for Scott Coker in the new Bellator MMA Women’s Division,” Bucci said. “I cannot find the right words to truly express how I feel. This is more than a payoff for years of hard work, love and dedication to this sport. This is a dream come true!”

Known for her dangerous kickboxing and Muay Thai, Bucci has become synonymous for pushing the pace and keeping her opponents on their heels, and is simply known as “No Fear” within MMA circles.

With the signing, Bellator now has a collection of four of the best featherweights in the sport, as Bucci joins the #2 ranked Marloes Coenen, #3 ranked Julia Budd, and #8 ranked Talita Nogueira.

(Image Credit: The Internet, via MMANYTT.SE)