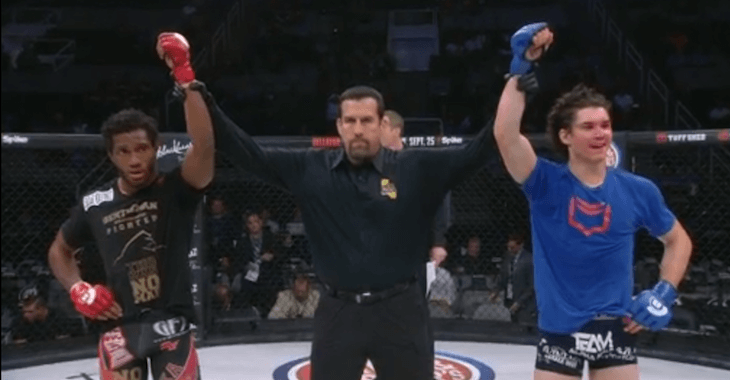 In the second fight of the night Team Alpha Male’s Mike Malott took on Thomas Diagne.

In the first round it was all Malott, who dominated Diagne. The fight went to the ground and Diagne really had no answer for Malott’s grappling game. The fight took place there on the mat for most of the round with Malott in control.

In the second both fighters kept it standing. Still, Malott seemed to stay in control. Diagne seemed hesitant. At one point Malott threw a kick but slipped. Diagne didn’t even attempt to go to the ground with him. Malott went back to the feet and they continued to strike. It was pretty even, but Malott seemed to keep the pressure on. Diagne did manage to land some nice kicks to the body. He also caught Malott with a big punch that looked to hurt him momentarily. Diagne didn’t attempt to follow up though. The second was a much closer round.

Diagne really liked those spinning body kicks. He landed a few. Malott clinched up, tried to push the fight to the cage. They broke free and went back to some heavy striking. Diagne seemed much more aggressive in the third and his timing was on point. He managed to land several nice kicks and punches. With about twenty seconds left Diagne shot in and got a takedown. Malott locked in a guillotine and it looked tight at first, but he got out. Malott tried to grab an armbar but time ran out.