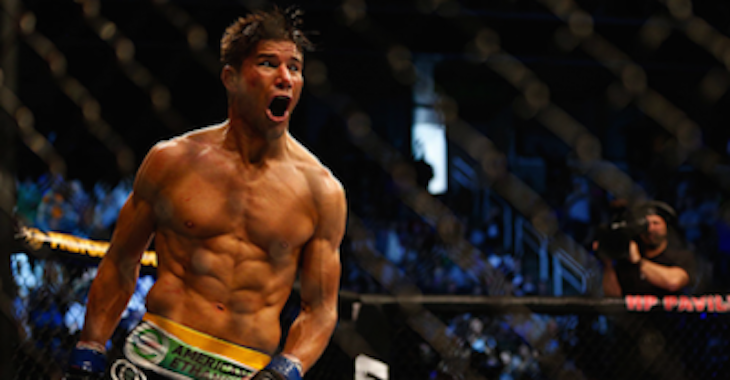 Former UFC fighter Josh Thomson made his Bellator debut in front of his home crowd at Bellator ‘Dynamite’ against Mike Bronzoulis.

These guys didn’t waste time getting after it. Both fighters got after it. They exchanged on the feet. Thomson almost landed a big head kick but it was blocked. Mike slipped and Thomson capitalized and got top control. He worked from top with Mike pressed on the cage. Thomson looked to transition to a better position. He made his way to full mount, with his legs triangled over Mike’s legs. From here Thomson couldn’t’ really posture up. Finally he gained normal full mount, but then the round ended. Good round for Thomson.

In the second round they danced around on their feet for a little bit, but once Thomson got ahold of Mike he tripped him to the ground and went to work. It was clear who the better grappler was (Thomson). Mike got to his feet but Thomson stayed on him and put him on the cage. They broke for a moment, but then Thomson got him back down. Thomson once again gained mount right before the round ended.

In the third it was a lot of the same. Thomson got the fight down quick, managed to lock in an arm triangle and Mike tapped quick, it looked like he went out though. What a win for Thomson, in front of a home crowd.

RESULT: Thomson wins via submission (arm triangle) at :31 of round 3