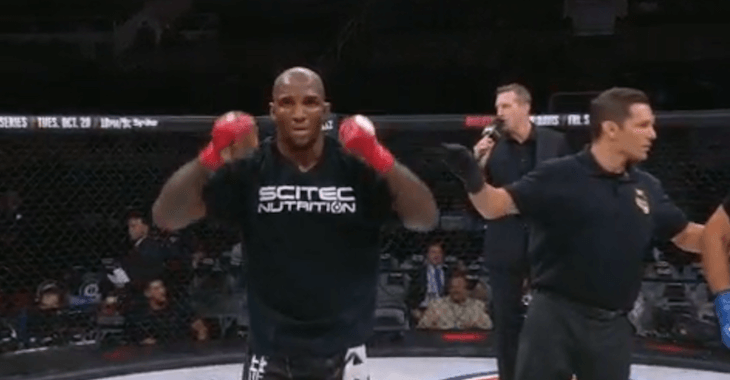 In the very first fight of the night we saw the four-man, one-night tournament alternate scrap go down.

At the start of the fight it was Ruiz who looked to get in and get Carmont down early. He pushed Carmont to the cage, but Carmont grabbed a hold of a kimura. Ruiz was able to get free and went back to grappling, trying to get a takedown.

Carmont again defended a takedown with a kimura threat. The were up on the cage and Carmont as unable to get it. They moved away from the cage, but Carmont kept control and worked from Ruiz’s back. Right at the end of the round Carmont gained mount.

This fight is only two rounds, so Ruiz really needed to get it done in the second. Carmont came out and tried a front kick, but slipped and fell. Eventually Carmont got Ruiz down and worked from his back. Carmont’s held control and has gone for several submissions, but was unable to finish them. Carmont dominated, with Ruiz unable to get up. Carmont was most likely just holding on, looking to stay fresh for a possible second fight. With about 45 seconds left Ruiz gained top control in full guard, but couldn’t do anything.

Side Note: GSP’s in Carmont’s corner.