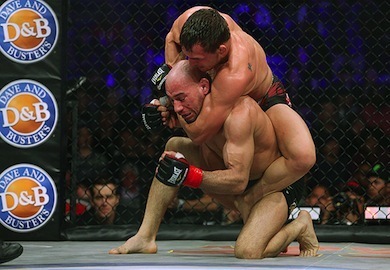 Now with Strikeforce gone, Bellator seems to be the biggest North American competitor for the UFC and has a solid debut show to back them up. Once on MTV2, Bellator has recently shifted to a station that was once synonymous with free-TV MMA, Spike TV. The deal came after the UFC signed a multi-year deal with FOX.

As for its first show on Spike TV, Bellator came out strong, hosting two memorable title fights while also starting off the light-heavyweight tournament. In the main event, lightweight champion Michael Chandler defended his title against challenger, Rick Hawn and Patricio Freire challenged Pat Curran for the featherweight belt in the first fight of the main card.

“It was the most watched Bellator event in the history of Bellator. We started the night in the first 15 minutes with 1.2 million viewers. 1.1 watched the Curran-Pitbull fight in the first half hour. We were up 394% over the MTV 2 broadcasts and had an average 938,000 viewers watching the entire broadcast with a 950,000 peak for the Chandler vs Hawn title fight.”

With a 1.2 million viewer peak and an average of 928,000, Bellator’s debut show made a strong case for themselves as a potential contender in the free-TV market over the next few years.

Thank you to MMAmania.com for the Conference Call