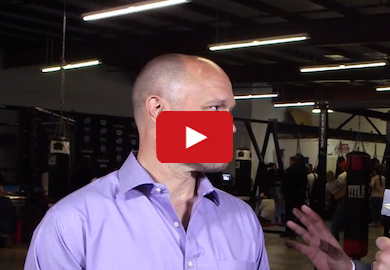 “Oh yeah, look, the ROI on this, so far has been spectacular. It goes deeper than that, it goes to what is happening with the affiliates. The affiliates right now are looking at a situation where the WWE is pulling out with the WWE Network, you know, and also at the same time, the UFC is pulling out to a certain extent with the Fight Pass or Fight Network, or whatever they’re doing. Right now, we’re completely at home with those affiliates. So, the Time Warners, the Comcasts, the DirecTVs, the iN DEMANDS, etcetera, have really come on board to support this event in an amazing way. So, you’re seeing it everywhere. The radio, the TV, the digital print is everywhere. So, Rampage is supporting it, King Mo is supporting it, Tito’s doing a great job, Shlemenko, where he can now, in his broken English is doing a great job. I feel it and everybody who I know, that I’ve ever touched in the fight business, is coming to me going “Man, I see that thing everywhere. It’s big.” So, it is… The reaction to it is what I hoped the reaction to it would be and I think these guys are going to deliver.”

– Bjorn Rebney via the enclosed video.