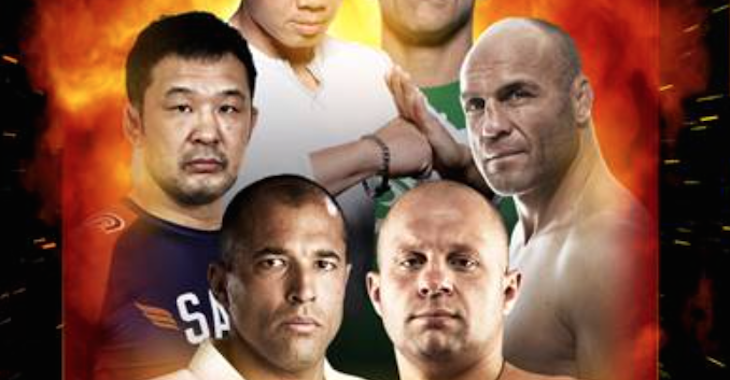 History will be made in September at “Dynamite” when Bellator and GLORY join forces to bring fans one of the most stacked cards of the year at the SAP Center in San Jose, California, USA. Before the event takes place, fans will have the opportunity to shake fans with some of the most legendary names of the sport!

Fans have been invited to the Bellator Fan Fest the night before “Dynamite” takes place. The meet and greet will take place at 7:00 PM on September 18th at the Dave & Busters, located in Milpitas, California.

Fedor Emelianenko, Randy Couture, Royce Gracie, Cung Le, Kazushi Sakuraba, and Frank Shamrock are all scheduled for the meet and greet and while it is open to fans, you must be a member of Bellator’s free group, “Bellator Nation”. “Nation” members will get to shake hands and take pictures with the names above as well as Bellator’s ring girls!

“The Last Emperor” Fedor Emelianenko caught the world of mixed martial arts off-guard when he announced he would be coming out of retirement earlier this year. While there has been no update as to which promotion he would be signing with, Bellator’s Scott Coker made it clear that he would not be competing in a Bellator cage first. World Series of Fighting and Ultimate Fighting Championship have thrown their name in the mix to sign the former PRIDE Heavyweight Champion. Where do you think Fedor will fight? Share your thoughts in the comment section below!