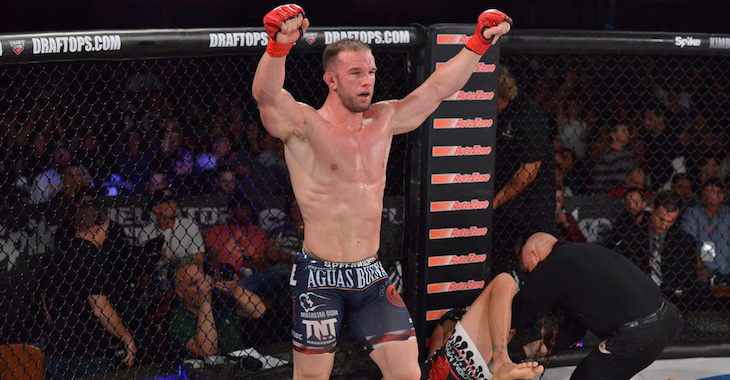 Bellator made their long-awaited return after a one month layoff between cards with “Bellator 144” which took place at the Mohegan Sun Arena in Uncasville, Connecticut. The vacated Bellator Middleweight Championship found a new owner on Friday night when Rafael Carvalho disposed of Brandon Halsey in less than ten minutes with a brutal liver kick.

Halsey never lost the title in competition, but rather due to a technicality. He walked into his Bellator 137 bout with Kendall Grove overweight and was stripped of the championship. The only way the championship would leave the cage slung over somebody’s shoulder that night was if Grove were to walk out victorious as Halsey was restricted from winning it.

He failed to recapture gold in what will likely be his last opportunity as Scott Coker revealed the former champion will be moving to light heavyweight.

“I was just talking to Halsey, and he was saying that when he was trying to go for the takedown and control him, he said he felt very weak,” Coker told MMA Junkie. “So he thinks that it’s a weight issue for him and that he has to go up in weight to be competitive because there’s too much of a cut for him, so you might see him at 205 here in the near future.”

Halsey will be joining the likes of Liam McGeary, Liam McGeary, and Phil Davis in the light heavyweight division. Who should Halsey step into the cage with first? Should he ease into the competition and take a lesser-ranked fighter, or jump right into the deep end and challenge the likes of King Mo? Share your thoughts and make your pick in the comment section below!