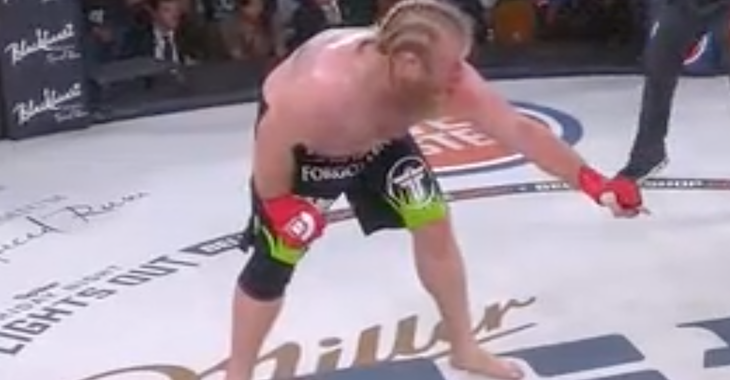 Justin Wren returned to the cage on Friday night after leaving the sport five years ago to pursue helping the pygmy people in the Congo.

At the start of the fight Wren ate a few big punches before moving in and clinching up. He pushed Burns to the cage.

From there Wren landed short knees to the body of Burns, then worked to get a takedown. Eventually the referee separated them. They retuned to the center of the cage and looked to strike. Burns looked pretty tired already, breathing heavy out of his mouth. They both threw some wild punches, then Wren again moved in and cliched Burns on the cage. From there Wren landed body punches while maintaining control. Burns pushed away and got the break. Wren shot in for a pretty lazy takedown and Burns brushed him off. Both men landed solid punches right before the round ended.

In the second, Wren grabbed a hold of Burns right away and pushed him to the cage. They separated, touched gloves and starting punching each other in the face. Obviously both men were pretty tired. Wren came in with a big punch but missed, Burns tried to counter but also missed. They stood right in front of each other and looked for big shots. Wren moved in quick, grabbed the back of Burns head, pulled it down and landed a solid knee. Burns stumbled back. Wren got him on the cage and stared unloading with knees to the head. They moved away from the cage and both played with each other, putting their hands on their knees and smiling. They they went back to work. Wren got hi on the cage again and landed more big knees.

Burns was pretty busted up at the start of the third round. Wren landed a nice leg kick. Then, looked to have landed another big knee. They went to the cage again in the clinch. After not doing anything they were separated. Wren landed a few nice inside leg kicks. Wren got him on the cage once again and managed to control him there. Another knee and leg kick landed for Wren when they separated. With about 40 seconds left Wren started landing with big punches. With 10 seconds left Burns returned the favor and caught Wren with two big punches. The fight ended and they embraced each other, exhausted.