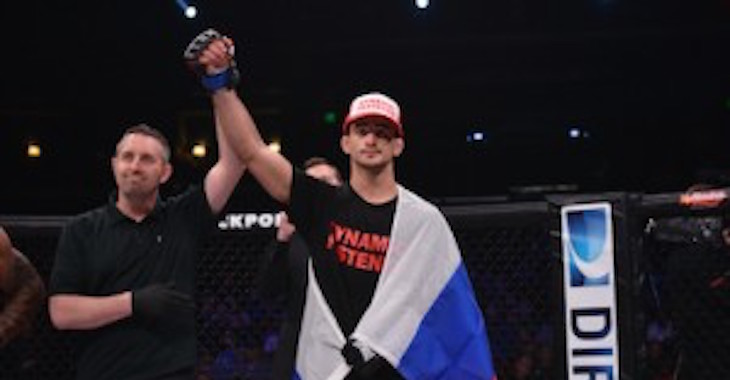 The welterweight title was on the line in the night’s main event, between champion Douglas Lima and challenger Andrey Koreshkov.

Andrey lands a leg kick, then a body kick. A short time later he shot in for a takedown. He managed to push Lima to the cage, then got him down. Lima got to his feet, but was still cliched on the cage. Andrey broke away briefly and tried to land a few strikes, then went right back to trying to get a takedown. He got Lime down for a short time, but he got back to his feet. Lima landed a left hand. Andrey shot in again but Lima moved out of the way. Lima, backing up landed a nice counter left. Andrey went for a head kick, it was blocked, then Lima land a leg kick. Andrey threw up a big spinning kick, but missed on that also. Then Andrey shot in again and took the fight down.

In the second Andrey still looked like the more offensive fighter. He threw more, while Lima sat back and looked for a big counter. Lima came forward with a big one two combo but missed on both. They clinched up and Lima got the throw takedown. He started working for a guillotine right away, but then gave it up. Andrey got back to his feet. With about a minute and a half left the pace start to pick up for a moment. They started swinging at each other, then Andrey clinched Lima on the cage. He eventually worked and got the takedown.

In the third Lima came out, landed a nice leg kick. Lima started finding a home for his jab Andrey got him close to the cage, then got the takedown. The rest of the round took place mostly on the ground with Andrey on top.

The fourth round also didn’t go so great for the champ. Andrey was relentless in his takedowns and ground control. At one point Lima got the reverse and took top position, only to lose it moments later. The fight went to the feet late in the round, but neither fighter landed anything before the bell rang.

In the fifth and final round Andrey came out with a spinning back fist and kept the pressure on. Lima was still looking for a big counter shot. Andrey landed a nice uppercut coming in, then clinched Lima on the cage. They eventually separated. Andrey was really beating him on the feet for the most part, then he clinched him onto the cage again. Lima reversed on the cage, then got reversed. They separated and Lime came forward with two big punches, but missed. Andrey clinched with 30 seconds left, then they broke and Andrey tried to shoot in, He got hit with a big uppercut. He was down on his knees and Lima stood over him, trying to land big shots. Andrey moved to his back and defended. The fight ended.