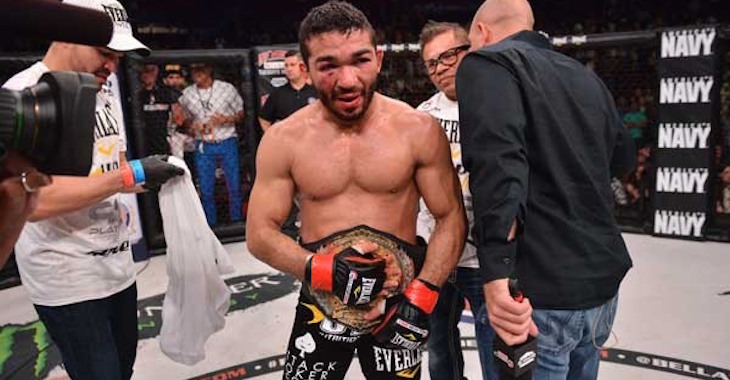 The featherweight title was on the line in the co-main event between champion Patricio Freire and Daniel Weichel.

Both fighters came out and felt each other out for a while. Finally they engaged, with Pitbull landing a combo. Weichel came in to land a combo and Pitbull  caught him with a big right hand. They were both very patient. Pitbull landed a nice one-two combo. Weichel came forward and tried a flying knee, then punch combo that backed Pitbull up. Pitbull complained about a back of the head punch, but fought on. Pitbull landed a nice left hook. The crowd booed a little bit. Pitbull went for a takedown, but backed out. Then Weichel came in at the 1o second mark and unloaded on Pitbull dropping him twice. The referee stepped in like the fight was stopped, but then said no the round was just over.

In the second Weichel ran out to meet Pitbull. He walked him down and went to work right away, he started going for it, landing big shots, then Pitbull landed a clean left hand that put Weichel’s lights out. Crazy come from behind win.

RESULTS: Freire wins via KO at :32 of round 2-retains featherweight title