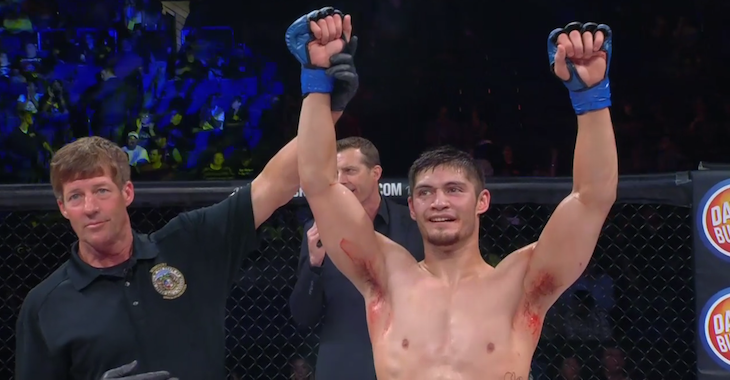 Welterweights Kyle Kurtz and Adam Cella duked it out in the Bellator cage.

The welterweights went at it early. Cella got the fight down to the ground early on and worked from the top, landing huge elbows for a brief period of time. Kurtz was able to improve his position and get Cella in his guard. From there, Cella continued landing big shots.

Kurtz began trying to work an arm from the bottom. Cella broke free and started striking form the top again. Kurtz tried to grab for an armbar, but lost it. The fight went back to the feet with thirty seconds in the round. Cella landed a huge punch that stumbled Kurtz.

In the second Kurtz exchanged punches then tried to move in for a takedown trip. Cella countered and ended up on top in full guard. Cella began bleeding bad, from his nose. He continued to land punches. Out of no where Kurtz made a quick move and locked up an armbar. Cella tapped immediately. Big come from behind win.

RESULTS: Kurtz wins via submission (armbar) at 4:15 of round 2