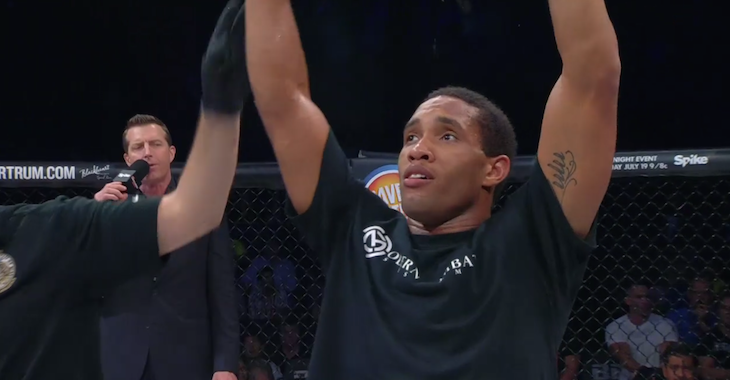 In the second fight of the night, lightweights Eric Irvin and Hugh Pulley went at it.

In the first the two lightweights exchanged strikes back and forth at a very high pace. With about a minute and a half left in the round they clinched and Irvin pushed Pulley to the cage.

After a while of fighting for position, Pulley made his move and reversed position, taking Irvin down to the ground. From there Pulley managed to get mount and landed some nice elbows before the round ended.

In the second, Irvin went for the clinch right away. He got Pulley to the cage. The fight made its way to the mat where Irvin threatened with a leg lock before eventually taking top position. Irvin worked from full guard for a while before again Pulley got the reverse. Irvin was able to get to his feet, and turn things around so he had Pulley on the cage in the clinch. Irvin worked hard for a takedown but Pulley made him pay again with a judo throw. Irvin got to his feet quickly and gained the clinch position again, with Pulley’s back again on the cage. A lot of grappling and position changes in that round.

Going into the third it was a pretty even fight. Pulley came out and tired to work a few jabs. Pulley was the aggressor, walking forward against Irvin. Irvin shot in with a single leg and almost got it to the mat, but failed. Irvin again went for a takedown/clinch and pushed Pulley to the cage. He eventually let him go and Pulley circled out and away from the cage. Irvin caught a leg from Pulley and held onto it like he was going to try a takedown, but ended up just losing it. Pulley landed a nice leg kick that actually caused Irvin to drop briefly. He got back to this feet but then moments later ate a big liver kick from Pulley. He moved back and grabbed his stomach while falling to the ground. Pulley moved in and tried to finish the fight. Irvin survived and got to his feet. Irvin managed to get clinch, but then got thrown again by Pulley, who quickly got mount, but lost it shortly after. The fight ended.