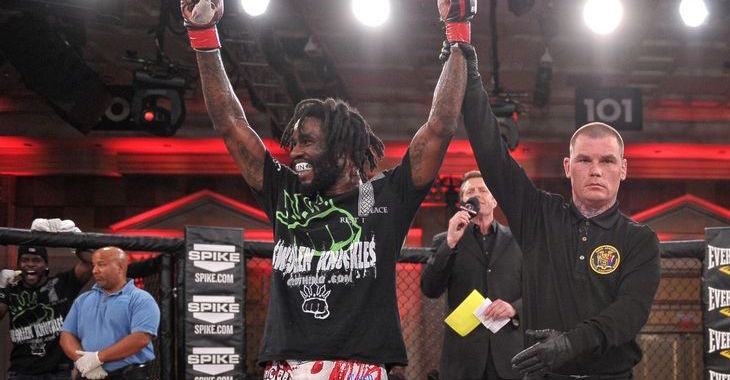 At the start of the fight Corrales landed the first strike, with a leg kick. Right away, Straus moved in and got the clinch and put Corrales on the cage. Corrales reversed position, then Straus regained the advantage. Corrales switched positions again and tried to grab a leg for a takedown. There wasn’t a lot of striking going on, until they broke away and Straus started swinging like a wild man. He dropped Corrales, but he quickly got to his feet. Corrales still had his back on the cage and ate a lot of knees and punches. He moved away from the cage but his legs were still wobbly. Corrales did land a nice leg kick. With thirty seconds left, Straus shot in and got a takedown. Straus went for a choke but the round ended before he could get a tap.

In the second Straus came out and landed a few nice body kicks. Corrales landed a leg kick, then ate a body punch. Corrales landed a few more nice leg kicks. Straus moved in and landed a massive punch that sent Corrales falling back. Straus jumped in quick and went for the rear naked choke. He had Corrales in a body triangle, then gave it up and moved to an arm triangle. After a brief moment he let that go and moved to full mount. Corrales tried to get up but Straus locked in a standing guillotine, then dropped down and sunk it in deep. Finally Corrales tapped.

RESULTS: Straus wins via submission (guillotine) at 3:47 of round 2