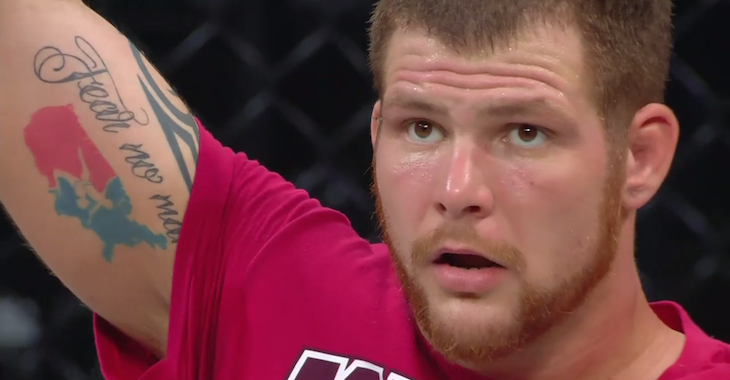 Chris Heatherly and Garret Gross fought at a catchweight of 160 lbs. because Heatherly was unable to make the lightweight weight limit.

Early on Gross ended up on his back. Heatherly worked several submission while on the top, which was most of the first round. With about a minute left both fighters made their way back to their feet. Gross began landing some nice leg kicks and body kicks. Gross looked sharp on the feet before the round ended.

Both fighters came out and landed nice kicks early in the second round. Gross tried to open up with his striking before Heatherly was able to shoot in and get a takedown. He worked from half guard. Heatherly was able to move to side control. He wasn’t landing any punches or ground and pound, just sort of laying there. The referee warned him to move and advance more. He tried for mount but got put back to half guard by Gross. The referee eventually stood them up. Right away Gross went to work, trying to land on the feet. In a scramble Gross got Heatherly to the ground and worked from half guard. The round ended with Gross on top.

Gross came out in the third and landed several big kicks. Heatherly went for a spinning back-fist, he missed but followed up right away with a body kick that landed, then moved in and got a takedown. With Gross up against the cage, Heatherly worked from half guard and side control. Heatherly eventually made his way to the mount position. Heatherly rode out Gross for the remainder of the fight.