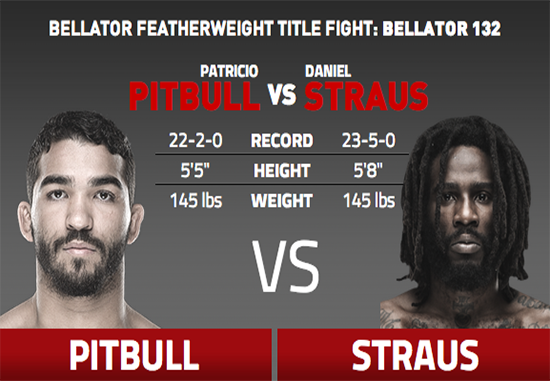 Tonight’s bout may go down as one of the most controversial championship fights in Bellator history. There were a handful of low-blows from both men and an eye poke from Straus led to multiple halts in action from referee John McCarthy. Straus was punished with a point deduction in the second round after he landed his third low blow of the fight in less than ten minutes.

Buried under all the stoppages was a grueling, brutal fight. Straus may be an unorthodox fighter, but he struck with intelligence after the first round and outstruck Pitbull 60 to 30 after fifteen minutes of action.

The fight went to the ground in the fourth round and that was where it would conclude. Straus tried to go for a kimura on the bottom, but he was in no position to do so. Pitbull made him pay for the mistake by ultimately taking his back and submitting him with a rear naked choke.

Patricio Freire def. Daniel Straus by way of Submission (RNC) 4:49 of Round 4