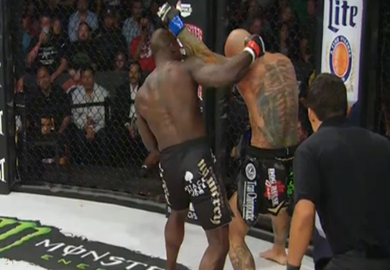 It did not take long for Melvin Manhoef to make an impact in Bellator.

After a short feeling out process, Manhoef cracked Doug Marshall with a right hook that sent him backing up toward the cage. Manhoef was patient in his attack and waited for another hole to present itself in Marhsall’s defense. Manhoef went low three times with leg kicks and followed up with a big right hook that sent Marshall crashing to the mat, face first.

Manhoef jumped on his opponent to finish it, but the referee pushed him off and stopped the bout.

After the bout, Manhoef was told by Jimmy Smith that Scott Coker will be giving him a shot at the Bellator Middleweight Championship next.

Melvin Manhoef def. Dough Marshall by way of KO (Punches) 1:45 of Round 1