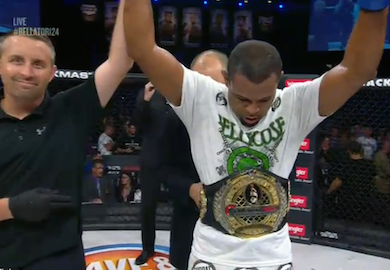 The fight was moving at a slow pace with neither fighter gaining the upperhand. Newton fought with more strategy as he picked his shots, but Beltran was landing in bunches and had the higher striking total. It seemed as if it was going to be anyone’s fight as they were essentially trading off rounds.

Toward the end of the third, Newton was backing up to the cage wall and Beltran charged at him with a hook to the body. As he threw his right hand for the strike, his left and lowered and Newton capitalized on this by throwing a spinning backfist. Beltran never saw it coming and got clobbered! Beltran crashed to the canvas and was out cold for several moments after the fight was stopped.

After the bout, Jimmy Smith brought Liam McGeary into the cage. McGeary and Newton shook hands, faced off and all but confirmed a championship bout in the future.