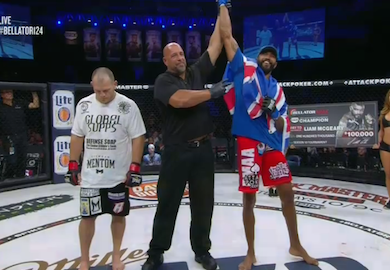 Liam McGeary may be the homegrown star that Bellator has been looking for.

Anundson looked to be in control for most of the first round, smothering McGeary from side control and forcing him to carry his body weight. McGeary threatened to submit Anundson with a shoulder lock from the bottom, but the referee did not count Anundson’s screams of pain as a verbal submission.

It looked as if the bout going to get out of the first round, but McGeary threw his legs up from the bottom of side control and locked on an inverted triangle choke! Within four seconds of being in the hold, Anundson had no choice but to tap out!