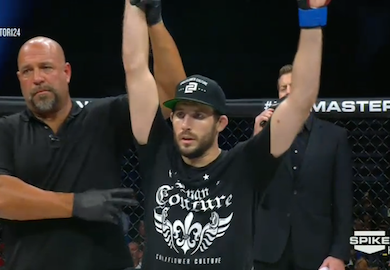 After exchanging knees to the groin, the fight went to the ground and it was the “Ryan Couture” show from there. He got a hook in and dictated exactly where he wanted Bagnasco to go. Couture locked the body triangle on and Bagnasco tried to spin away from danger, but he only presented the life-long wrestler with his neck.

Couture wrapped his bicep around his neck and forced him to submit.