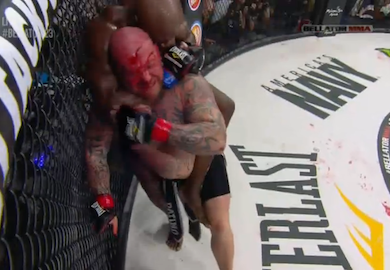 Bobby Lashley’s Bellator debut was as big of a success as he could have hoped for, earning a stoppage in the second round against Josh Burns

It was clear that Josh Burns and Bobby Lashley were nowhere near the likes of Cheick Kongo in terms of skill inside the cage, but it was an attraction fight and there was nothing wrong with that.

Lashley took Burns down with ease in the first and second round, threatening him with a slew of submissions along the way.

Burns would never make it back to his feet after a grueling first round, and he exposed his back trying to stand up in the second. Lashley, a lifelong amateur wrestler, saw the neck present itself and he latched onto it with a rear naked choke attempt.

On his feet and leaning against the cage, Burns was trapped in the grip of Lashley. Elite fighter or not, Lashley is a strong human being and he cranked with all of his strength, forcing Burns to immediately submit.

Bobby Lashley def. Josh Burns by way of Submission (RNC) 3:54 of Round 2