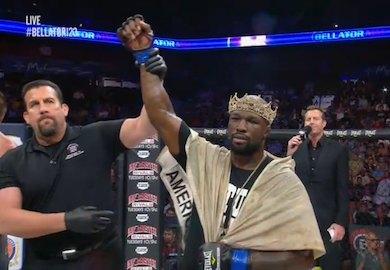 Muhammed Lawal is back to his winning ways inside the Bellator cage with his TKO victory against Dustin Jacoby tonight at Bellator 123.

As expected, wrestling standout King Mo took striker Dustin Jacoby down to the mat and tried to soften him up with ground-and-pound. Jacoby worked off his back and eventually made it back to his feet where he neutralized the wrestling game of Lawal by keeping a safe distance, giving him plenty of time to stuff takedown attempts.

With distance between them, Jacoby was seemingly out of the danger of King Mo’s shooting skills. Jacoby was not prepared for Lawal to close the distance himself and catch him off guard with a right hook! The hook wobbled Jacoby and sent him stumbling around the cage until he ultimately ended up on his back. Lawal jumped on top of the GLORY kickboxing stand out and blasted him with right hand after right hand until the referee had no option but to wave the fight off.