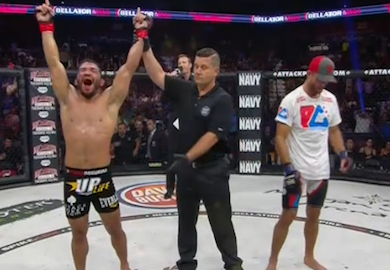 Bellator 123 caps off an exciting card with a title change; Patricio ‘Pitbull’ Freire is your new champion!

Like any championship bout, the first round saw a lack in action as the champion and challenger spent the full five minutes feeling each other out. It looked as if Curran got popped with a good punch and wobbled, but he simply slipped. When he got back to his feet he had full composure of his body.

Pitbull figured out the pacing of Curran in the second round as he caught him off guard with a right hook and dropped him to the canvas. Curran popped right back up to his feet but he ate a number of shots, giving Pitbull a ton of momentum. That series of punches seemed to have sapped the energy from Pitbull, however, as he began to breathe with his mouth open and he hung his hands low.

Pitbull’s power apparently outmatched his fatigue, and this became evident when he blasted Curran with a left hook that dropped him again. Once again, Curran was quick to pop up to his feet but it was all Pitbull from there. Curran picked and landed some decent shots, but Pitbull was in another league after the knockdown and landed more strikes.

The final ten minutes of the bout was razor close and as even as it could be. Curran opened the fourth and fifth rounds strong, but Pitbull would chop at the endurance of the champion with his powerful leg kicks and body shots. Walking into the judges’ call, it was clear that Pitbull took rounds two and three and finished strong in rounds four and five.

In the end, it was Pitbull who would walk out of the cage with his arms raised and a shiny new belt around his waist.