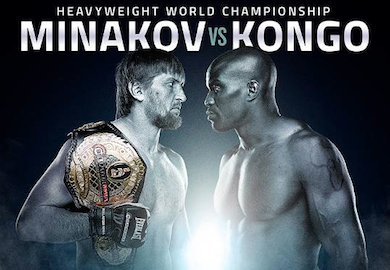 The heavyweight championship was hanging in the balance tonight as Vitaly Minakov and Cheick Kongo battled on tonight’s main event.

The fight kicked off in controversial fashion as Minakov landed two low-blows on Kongo which ultimately led to a point deduction for the heavyweight champion. Kongo could not take control of the round despite getting the point advantage and the first round was deemed a tie.

The fighters’ fatigue deteriorated quickly throughout the rest of the fight and it turned into a contest of who could land the takedown first. Kongo landed an easy takedown on Minakov at the start of round two but it did not lead to anything. They swapped hard punches and wobbled each other but they both fought safely to reach the end of the round.

The pace of the fight slowed down drastically after round two. It essentially became a fight of whoever could land a takedown first would control the rest of the round in top position. More often than not, Minakov had the advantage. Kongo tried to strike off his back but did not have enough momentum behind his punches to convince the judges he was doing anything productive.

Vitaly Minakov put on an amazing performance during his last fight with Bellator and we should expect him to rebound from his performance tonight against Cheick Kongo.