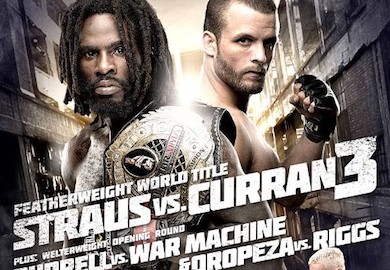 The Bellator Featherweight Title is on the line in one of the biggest rematches of 2014 as reigning Bellator Featherweight Champion Daniel Straus defends his crown against former Bellator Champion and Crystal Lake, Illinois native Pat Curran on Friday, March 14th from Chicago’s Horseshoe Casino live on Spike TV at Bellator 112. The night will also showcase the Bellator Welterweight Tournament opening rounds and a full card of local talent.

The event will broadcast live at 9 p.m. EST/ 8 p.m. CST on Spike TV. The preliminary card will be streamed live and free on Spike.com beginning at 7 p.m. EST/ 6 p.m. CST.

Two of Chicago’s top-talents will kick off the Spike.com show as Daniel James will make his professional debut against Erick Correa. Holding a 2-0 professional record, Correa is coming off a first round knockout victory and plans on maintaining his undefeated career in his fight against James.

After defeating Karl Amoussou at his Bellator debut in October, Paul Bradley will face Nathan Coy who is riding a five-fight win streak. Previously meeting in 2009, Bradley walked away with a split decision victory over Coy and doesn’t see this fight ending any differently.

Both looking to maintain their undefeated records, Darrion Caldwell will meet Lance Surma as they both step under the bright lights of Bellator for the first time. As one of the biggest prospects in MMA, Caldwell is a former NCAA Division I Champion and a two-time All American wrestling champion. With strong striking skills, Caldwell is looking for the knockout against Surma to boost his career to the next level.

With 46 professional fights under his belt Jason Guida will fight Chicago native Anthony Gomez. Grabbing his previous two victories by first round rear-naked choke, Gomez will look to his ground game to take down Guida in front of the Hammond crowd.

After being featured as a participant on Bellator MMA’s reality TV show Fight Master, A.J. Matthews will return to the Bellator cage and face Belal Muhammad. Known for his precise striking, Matthews has recorded four victories by knockout and is looking to collect another finish against Muhammad.
Heading into this fight on a four-fight win streak, Diego Marlon will fight Rob Menigoz. With 24 professional wins, Marlon will rely on his previous experiences in the cage, but will have to hold off Menigoz who only has one professional loss.

Known for finishing fights as quickly as possible, Derek Loffer will fight Bobby Reardanz in a lightweight battle. Loffer enters his fight winning all six of his professional victories by first round finish, five coming by knockout
The full fight card is listed below.