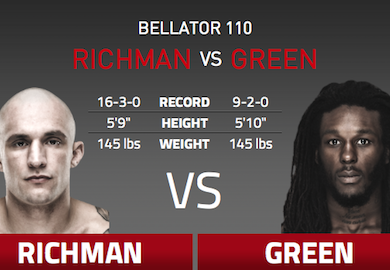 Mike Richman and Desmond Green kicked off the tenth season of Bellator tonight with their first-round featherweight tournament bout.

Mike Richman was the first to find a comfortable striking distance as he started to pick apart Desmond Green at the end of the first with decent combinations. Green also absorbed some hard leg kicks in the opening moments of the fight which caused him to land awkwardly on his lead leg multiple times.

That’s not to say that Green did not have some shining moments, as well. He started to land his jab consistently in round two, causing a mouse to form under the eye of Richman. Richman also started to bleed out of his nose and in a bout that went to decision, that could have affected the opinions of the judges. Green also landed a takedown early on in the round which led to some ground control and close-punches. He did not try to work for a submission, but he did build up his ‘Time on Attack’ statistic.

In the eyes of many, the fight came down to the wire in the third round. However, both Richman and Green spent most of the round fighting for control of the center of the cage rather than trying to win the fight. They fought methodically and picked their spots, but refused to do anything that could risk getting caught. Richman caught Green with an overhand right with fifteen seconds left in the fight, but it led to nothing.

Desmond Green was awarded with the unanimous decision victory and will advance to the semi-finals of the Bellator Featherweight Tournament.