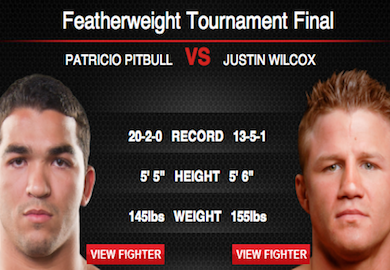 Justin Wilcox had a tough road to get to the finals, but Patricio Pitbull was simply too much for Wilcox to handle tonight. Pitbull kept the fight standing and outstruck his opponent, dropping him multiple times in the opening round.

Pitbull let Wilcox get back to his feet only to drop him once again with a hard combination. This time, Pitbull followed him to the ground and attacked him with a flurry of punches. Wilcox tried to scoot his way out of danger, but Pitbull was on him the whole time and wouldn’t let up. With every single punch connecting flush, the referee had no choice but to save Wilcox and call an end to the bout.

Patricio Pitbull has been crowned as the winner of the Season 9 Featherweight tournament and will face the champion in the near future.

Patricio Pitbull defeated Justin Wilcox by way of TKO (Punches) 2:23 of Round 1