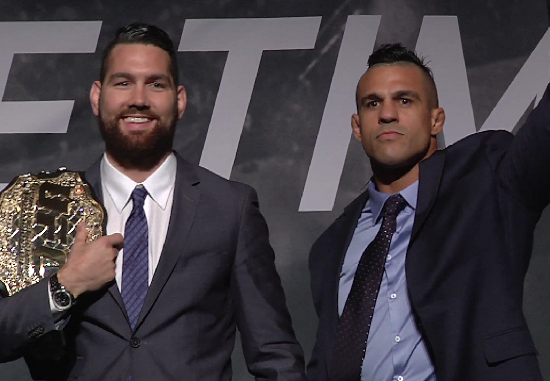 Chris Weidman and Vitor Belfort have been scheduled to fight for the UFC’s middleweight title on three separate occasions.

Unfortunately for fight fans, the grudge match has still not come to fruition, due to back-to-back injuries suffered by the “All American” champion.

When Weidman was forced to pull out of February’s UFC 184 headliner, Vitor Belfort asked the UFC for an interim title fight to be made.

However, Vitor eventually opted against fighting Machida, claiming he would not fight anyone but Weidman unless the UFC stripped the “All American” of his title.

With that said, it appears that Belfort was initially interested in fighting Yoel Romero for an interim title:

“Vitor Belfort didn’t close the deal I was expecting when I asked Romero for the interim, so we decided to wait for Weidman in May,” Belfort’s wife and manager Joana Prado posted on her Instagram on Monday. “It is what it is. I know we will come back stronger than ever, even when the situations are bad!”

With the news, fans will now have to wait until May to see a UFC middleweight title fight.