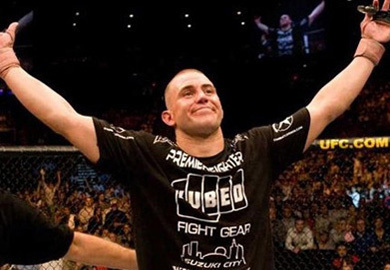 “Now I know for sure I own Michael Bisping. I fight MMA’s biggest crap-talker in the co-main event of UFC 159 in New Jersey on April 27, but I know, right now, right here in camp, that I own that guy.

So, with me, he also knows I can knock his ass out with one shot. And he don’t want to risk getting embarrassed again, talking crap and then getting knocked out and having the fans laughing at him again.

So he’s not talking crap, he’s not shooting off his mouth anywhere like he usually does, he’s not looking to make bold predictions like he normally does. He knows that I can KO him at any point in the fight. Even one shot, at like 60 percent power, landing anywhere above the shoulders, will knock him out. He knows that. He’s going to run around, jab and move like he always does, and he knows 15 minutes is a long time to do that against a guy with all the skills and more “oomph!” on his shots than he does.

I’ve studied this guy. I know his style in the Octagon, and I know his style at the press conference and in interviews. He’s not doing the same stuff in the build-up. He’s already trying to blame his corner ahead of time, saying if he doesn’t win, it’s their fault. No, Bisping, it is going to be my fault when you get KO’d again.”

During final preparations for his UFC 159 bout against Michael Bisping, Alan ‘The Talent’ Belcher, took to his personal blog to throw some stones at his upcoming opponent.

While everything he says seems to be factually accurate, is his assessment correct on Bisping’s mentality leading into this fight?