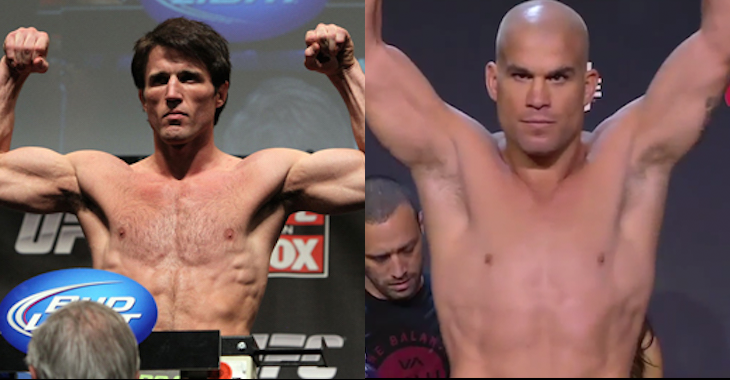 Former UFC title contender Chael Sonnen was recently a guest on Jim Rome’s show on Showtime and Tito Ortiz just so happened to tune in. Ortiz did not take too kindly to the fact that Chael Sonnen referred to himself as a former champion and took it public with a tweet.

Was watching @jimrome on @SHO_Network. Quick question! When did @sonnench win a @ufc LHW title? Did I miss something?

Chael Sonnen caught wind of the message and responded quickly, trying to warn Ortiz to choose his words wisely.

Not crazy about your tone, Tito. https://t.co/VPFXcYT8bE

@sonnench @jimrome @SHO_Network @ufc come on Chael it's hard ass work 2get that title.Shouldn't be thrown around like a name tag.#justsaying

While Tito Ortiz has a point, Chael Sonnen responded by pointing out that Ortiz not have had the most difficult path to gold in the history of the sport.

Earl work is one way, easy opponents is another. https://t.co/1Ra4YZbqAB

@StaredownRadio @sonnench @BellatorMMA @jimrome @SHO_Network @ufc not even an idea. To be labeled as champ is an honor.Not 2be thrown around

Needless to say, these two don’t like each other. While Chael Sonnen will likely be UFC for life, it would be interesting to see him fight in a Bellator cage just so he could get his hands on Tito Ortiz. Who do you think would win that fight?