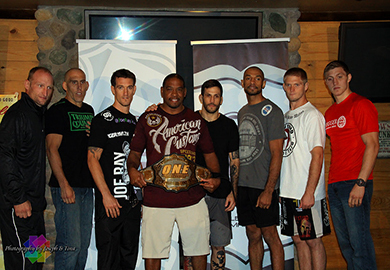 Roan Carneiro outlasted seven other fighters in a one-night tournament at “Battlegrounds MMA: One Night Elimination” and took home an extra $50,000 in the process. His name now sits on the prestigious list of one night tournament winners in mixed martial arts along the likes of Dan Henderson, Takanori Gomi and Don Frye.

Carneiro made quick work of his first opponent Randall Wallace as he submitted him in the opening round with a gruesome looking armbar. There was some concern after Carneiro’s quarter-final bout that he would not be able to compete in the semi-final as he was suffering from dehydration.

Carneiro was allowed to continue and he finished Trey Houston in the second round of the semi-finals to advance to the finals where he would square-off against UFC veteran Brock Larson.

Carneiro was dominant in his final appearance of the night as he smothered Larson with his superior grappling skills. Larson was not able to land a takedown and his limbs were tied off, which restricted him from trying to blast Carneiro with any dangerous strikes. Whether he was on the mat or pinning Larson against the fence, Carneiro was impressive in his performance as he was always working to end the fight with a submission.

Tonight was the first time Caneiro competed in a mixed martial arts bout since October 18, 2013. Not bad for his first night back.