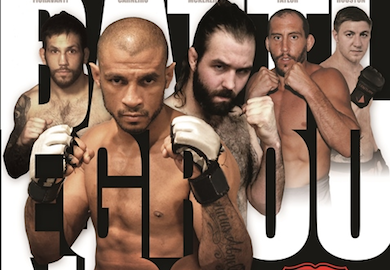 All eight fighters made weight and drew their quarterfinal stage matchups one day before the highly-anticipated, one-night BattleGrounds MMA welterweight (170 pounds) tournament that will award its winner a grand prize of $50,000 live on pay-per-view from the BOK Center in Tulsa, Okla. on Friday, October 3.

The official weigh-in was co-hosted by WWE Hall of Fame broadcaster Jim Ross and retired UFC superstar Chael Sonnen, the duo that will call all of the live televised action in the cage tomorrow.

Only one tournament contestant – submission expert Cody “AK Kid” McKenzie (15-4) of Spokane, Wash – needed a second try to make the required weight after he originally tipped the scales at 172.4 pounds. McKenzie will square off with Brock Larson (37-8) of Brainerd, Minn. Larson, a two-time, one-night tournament winner weighed in at an even 170 pounds.

In the same tournament bracket, Joe Ray (11-3) of Sarasota, Fla. registered a weight of 169.6 pounds and drew Luigi “The Italian Tank” Fioravanti (24-11) of St. Louis, Mo. as his quarterfinal stage opponent. Fioravanti, a hard-punching protégé of retired kickboxing champion Jesse Finney, weighed in at 171 pounds.

In the new co-main event, bantamweight (135 pounds) finisher and former NCAA Division I wrestling standout for Oklahoma State University, Tyler Shinn (6-2) of Stillwater, Okla., will square off with KO artist and rising star Chris “El Guapo” Gutierrez (4-1) of Greenville, Texas. The bout between Shinn and Gutierrez was elevated to co-main event status yesterday after Jonny Carson of Broken Arrow, Okla. withdrew from his scheduled co-main event matchup with Danny Navarro of Riverside, Calif.

In Superfight action on the pay-per-view telecast, former Oklahoma State University All-American wrestler and undefeated featherweight (145 pounds) Mixed Martial Arts (MMA) upstart Jamal Parks (3-0) of Tulsa, Okla. will look to extend his perfect run in the cage in a Superfight with Ruben Warr (3-3) of Whittier, Calif.

BattleGrounds MMA ‘O.N.E.’ will be distributed at a price point of $19.95 in the United States and Canada by Integrated Sports Media for live viewing, beginning at 10 p.m. EST/7 p.m. PST on both cable and satellite pay-per-view carriers iN DEMAND, DirecTV, DISH and Avail-TVN in the United States and Bell TV, Rogers, SaskTel, TELUS, MTS and SHAW PPV in Canada.

The free-of-charge pre-show bouts will begin at 9 p.m. EST/6 p.m. PST. In addition, the event will be available online as an iPPV at a price point of $19.95 on Go Fight Live (www.gfl.tv).

Tickets for the event, priced from $65, can be purchased online at www.bokcenter.com as well as at Arby’s Box Office at the BOK Center, all ticket outlets, or by calling 1-800-7-BOKCTR.

Doors at BOK Center open at 6 p.m. CST. The first preliminary bout will begin at 7:15 p.m.