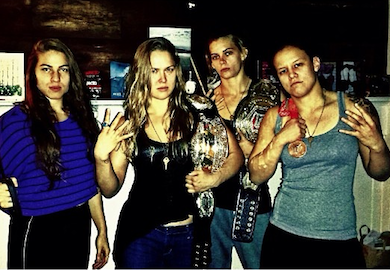 Ahead of her UFC 170 main event, Ronda Rousey and the UFC held a media day at Ronda’s L.A. gym to help promote this month’s pay-per-view event.

Having taken up with two of her TUF teammates and the always present BFF, Marina Shafir, the girls are apparently down with pro-wrestline like never before.

Baszler is a Josh Barnett product, so there should be no surprise here.