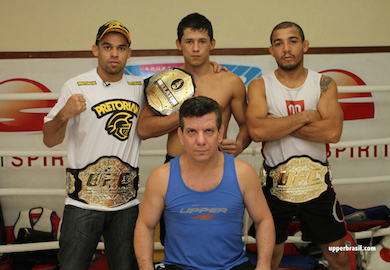 Former UFC bantamweight champion Renan Barao was gracious in defeat this past Saturday night, stating the following after his loss to T.J. Dillashaw:

“It was a really tough fight,” said Barao in cage. “I congratulate him, it was his fight tonight. But I’m coming back.”

The same unfortunately cannot be said for Nova Uniao 2nd degree black belt and top-ranked Bellator featherweight Marlon Sandro. “The Gladiator” took to Instagram where he blamed UFC scheduling for the loss:

I’m sure you will come back stronger brother, will do whatever it takes to take what you and your back. Tremendous romp that you just did to defend the belt and you do not have time to rest and forced you to fight this bunch of crooks and injustice, but God does not sleep we come back stronger!

Sandro is likely referring to the fact that Barao had two title-fights within 112 days of eachother. Whether or not the quick turnaround had an effect on Barao’s performance remains unknown. Thoughts?