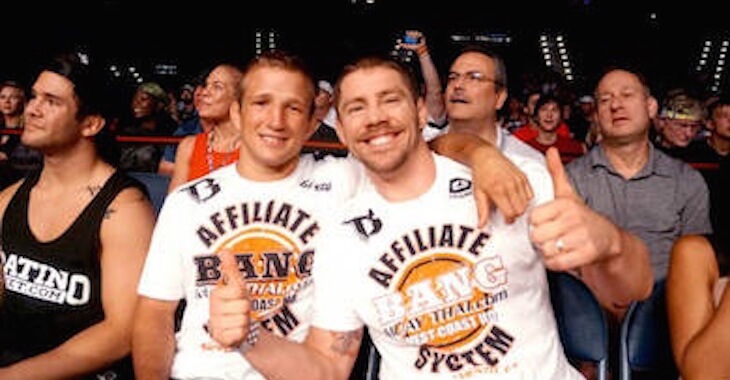 The feud between Duane ‘Bang’ Ludwig and Team Alpha Male’s Urijah Faber continues to move on.

Last week, Ludwig talked to FOX Sports and attempted to offer of his version of an apology. He talked about some of the finical disagreements he had with Faber, but did say he is willing to apologize for anything Faber thinks he’s done wrong. Honestly, it came out like sort of a backhanded attempt at an apology.

Which is what Faber seemed to think then he recently addressed the whole situation.

On Monday, Ludwig again talked about the situation when he spoke with MMAFighting about what Faber had to say, regarding Ludwig being bully and making racial jokes in the gym.

“I don’t know what the hell he’s talking about. There’s jokes floating around the gym all the time. For him to point me out, like what the hell dude?”

Ludwig went on to talk about why he thinks Faber is saying all this stuff and mentioned that he thinks the Team Alpha Male fighter might be getting a little ‘punchy.’

“I think he’s got a lot going on. He doesn’t quite keep tabs on the things that he says and things get lost in the shuffle. He’s in the position where no one really questions him. I’ve been around him for two years and no one really questions him. It’s his show, except for when it comes to me. If something that was supposed to happen doesn’t happen, then I’m going to ask you about that. That goes for anybody.

“He does great on the mic, but he might be just a little bit punchy. And I’m not trying to talk crap or whatever. But he gets cracked hard with a lot of shots and I don’t think that helps, either. When you tell me you’re gonna do something, I expect that. It’s called being a man of your word.”