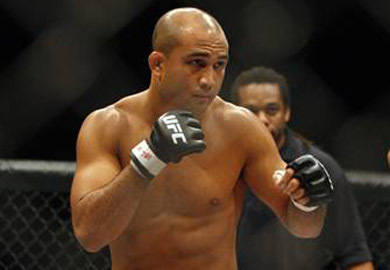 By Duane Finley:
Every fighter’s journey through mixed martial arts is different. In most cases, victory and defeat dictates every step, ultimately shaping the direction a career will travel, but every now and again, a fighter comes along who doesn’t fit into any particular mold.

If ever there was a mixed martial artist who matched this description it is B.J. Penn.

For more than a decade “The Prodigy” has been one of the sport’s biggest stars. Along the way the 33-year old has championed two different weight classes and cemented his place in the chapters of UFC history. It has been a storied career filled with highs and lows, twists and turns, but all done for the love of the fight.

It has been a diverse experience for the proud Hawaiian and one that continues to unfold. He knows the acclaim which comes from achieving greatness in the sport, but also knows the weight of disappointment from the times his career has been pushed to the boundaries of irrelevancy. No matter the situation, Penn has always come back swinging. His passion for the battle has created a legion of devoted fans unmatched by any fighter, past or present, and the emotions created by their support goes beyond words for the Hilo native.

It is a journey which has taken Penn from the island shores to a legend in the sport of mixed martial arts. In good times and bad, every moment has mattered and even Penn himself isn’t certain how everything came to be.

“I don’t know how I got in this position,” Penn said with a smile. “I don’t know how I ended up as a professional athlete. I’m not a kid who played baseball when he was young, then played in college, and ended up in the major leagues. I really don’t know how this all happened. I was just along for the ride and went from step to step always looking at what I could do next.

“When I look back I’m like, ‘man…I’ve been in the UFC for a decade.’ I’ve won championships, accomplished different things, but it all seems crazy to me how I got to where I’m at as a professional fighter.

“I saw an article recently that talked about how I still hold court with the fans. All these big names and everybody still get excited about me. People getting excited to hear about my training or what I’m doing; that is really amazing to me. I always ask my family and my friends, ‘Why do the fans like me so much? I’m the biggest f-up there is.’ Is it because I represent the average man? Is it because I’m a fat guy trying to go out there and give it his best shot like everybody else? I don’t know exactly what it is but I’ll tell you right now it blows me away. I don’t understand it but I definitely appreciate and love my fans.”

Penn has spent a career forging his own path. It has been a unique approach in a sport where the majority of stars operate in well traveled lanes. Some decisions have created conflict and tensions, while others have lifted Penn to great heights.

Breaking new ground and visiting both ends of the spectrum of success have created an internal struggle for Penn and it is a battle he believes he has finally resolved once and for all.

With his body, mind, and spirit rejuvenated, Penn will look to add another chapter to his career when he faces surging prospect Rory MacDonald at UFC on Fox 5 in Seattle WA. The spotlight will once again focus on the talent, the passion, and the expectations created on the promise of past performances.

In front of a sold-out crowd in the Key Arena, Penn will prepare to once again make that walk to the Octagon. It has become a signature moment for MMA fans to witness. On Saturday night when he hears that first notes of the ukulele playing from “Hawaii 78”, the fighter, father, former champion, and legend will make his way to the Octagon to put everything on the line. It is the only way he knows, and he plans on bringing it all down on MacDonald.

“When that song comes on I know everybody is tuned in and it’s time,” Penn said. “It is hard for me to talk about that song honestly. Sometimes I wonder if I have done that song disrespect because I haven’t been on a winning streak. Does the song still give me the same fire it did years ago? We will see. But I have a feeling come Saturday night, I am going to feel the same way I felt the first time I walked out to it. I just feel something right now. I don’t know what it is but it is a great feeling.

“Crow has been on the menu way too many times for me to sit here and say I’m going to go out there and knock him out in 10 seconds. But I’m going to give him hell and I’m bringing hell with me into that cage Saturday.”