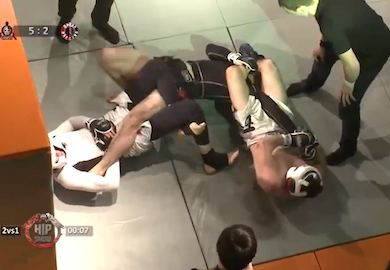 I woke up and couldn’t believe that AXS TV actually signed off on airing this atrocity of an MMA competition.

Where is Mark Cuban when you need him?

I guess my gripe here is that MMA already carries a certain stigma with it that we have been trying to overcome for years. This show only adds fuel to that fire, but AXS’s TV’s executives appear to have sold out.

Here’s how they describe the show:

“Hip Show: Arena Combat” is a two-on-two competition that takes place on a battleground aptly named “The Arena.” “The Arena” includes five different obstacles that present a realistic, urban-style of combat. Fighters look to score points through striking, grappling and controlling the obstacles. The “Hip Show: Arena Combat” tournaments are contested in the 70 kilogram lightweight (about 154 pounds) and 80 kilogram middleweight (about 176 pounds) weight classes, and in a round robin format.