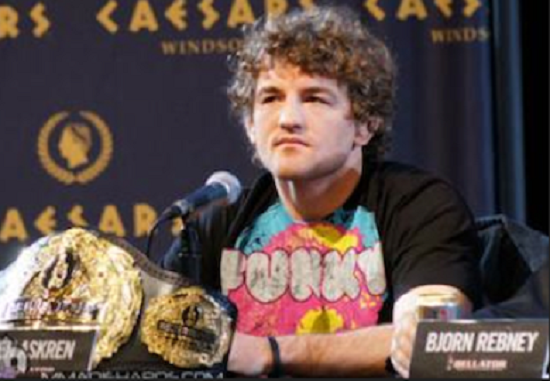 Ben Askren is never one to shy away from speaking his mind, and when the UFC announced the signing of CM Punk at UFC 181 Askren quickly took to Twitter to speak out against the UFC’s newest fighter (See that HERE).

Askren continued to discuss the signing this week, speaking to MMAJunkie.

“Everyone in the locker room just thought it was strange. Obviously, if you’re on Twitter you heard rumors about it prior to this, but for it to actually happen was a shock, because the UFC is the organization that claims to promote the best fights in the world. Here they signed a guy who not only has no MMA fights but has no real combat-sports background at all. It’s not like he was some boxer or wrestler, or a guy like Brock Lesnar. He was this hulking guy who was a national champion wrestler. CM Punk has no real background in this at all.”

“A lot of people are excited about this CM Punk signing because he’s got a big name, a lot of Twitter followers or whatever, and he’ll bring a lot of initial attention, but the question I ask is, how are they going to find someone that they can be sure he wins a fight against? Say they get someone who’s 2-1. What if he lost to that guy? What is his long-term drawing power? He’s 36 and has no combat-sports experience. People might be excited about it for a fight or maybe even two fights, but can he really stay around for three, four, five years? And can he stick around for that long while also still keeping the sport of MMA legitimate?”