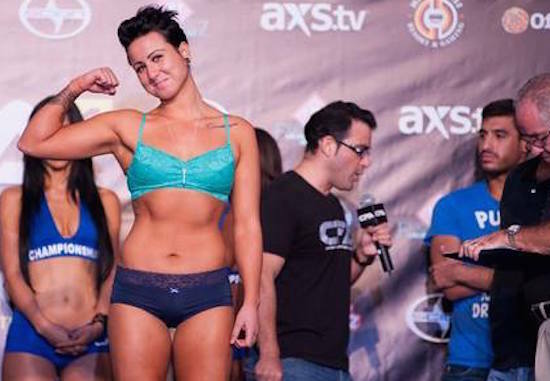 The former World Series of Fighting competitor will make her debut against Raquel Pennington. Evans-Smith was a guest on this past Sunday’s episode of BJPENN.COM Radio. She gave a detailed account of the phone call that changed her career.

Evans-Smith will be filling in for Holly Holm against Pennington, and she knows taking on a fight on short notice isn’t the best case scenario, but who can say no to the UFC.

“Of course it’s not ideal that I’m taking a fight on short notice but I’ve been thrown a lot of obstacles in my fight career and I’ve overcome all of them, this is just one more that I’ll overcome.”

Evans-Smith goes on to tell the story of the coveted UFC call.

“I’m going to be completely candid with you, I don’t want to hold anything back, I’m a story-teller, I like details, I’m actually a pseudo journalist, that’s why I went to college. So I’m going to be completely honest with you. I was sitting on my couch and it was exactly three weeks from fight night and Ali [Abdel-Aziz] the matchmaker called me and I remember thinking to myself, ‘Oh crap, the UFC decided to call right now’, because at that moment, I had taken almost two weeks off from training because a financial situation. World Series was not fighting me, I felt like I was collecting dust, I was bartending a lot just making money and that was going well and I really had that moment—there’s not a lot of those moments that I can really speak of—but I had this moment of like, ‘Is this really the right path, am I doing the right thing?’ I train every single day and call myself a professional fighter but I can’t pay the bills and two weeks went by I was not training as much and here comes Ali giving me a phone call saying guess what, Shelby [Sean Shelby] called me from the UFC, he wants you to fill in, he wants me to release you, I’m going to release you and let you pursue your dream because if I held you back then that would be me keeping you from your dream. I’m just like, ‘Are you serious? Now of all times’.”

“I knew I was going to get an amazing opportunity in my life, something like this, but of course life’s not going to be like ‘Oh here’s a UFC contract, you have two months to train.’ Life threw me this amazing opportunity but she wrapped it up with some crap all around it.”

She admits to taking two weeks off from training before getting the fight, but insists that it won’t matter in the end.

“Two weeks my butt, it doesn’t matter. It was a blink for me. We went from 0 to 100 and I’m peaking at the perfect time and it just goes to show that, like I said, it’s just one more obstacle life put in front of me and I’m going to get in there and show everybody that it doesn’t matter what life puts in front of you.”