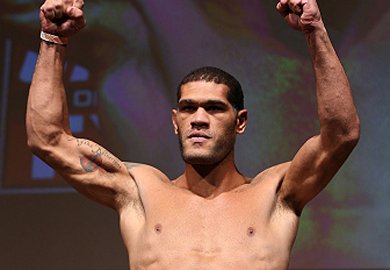 Former UFC heavyweight title challenger, Antonio “Bigfoot” Silva (18-5 MMA, 2-2 UFC), is reportedly headed to see his doctor, in hopes of getting medically cleared to make a potential drop to 205-pounds in an effort to score a fight with former friend Thiago Silva.

According to “Bigfoot”, he is not looking for a run at the title, he just wants to kick Thiago Silva’s ass! Here’s what the Big Man had to say in an interview with Fighters Only:

“I used to visit his house and he did mine, I was something of a brother to him and he simply stabbed me in the back and cheated me. He said I’m upset because he left ATT, but he knows its not because of that why I’m mad. I thought he was a coward. Many fighters perform at different weight classes, for example Anderson Silva and Dan Henderson. I personally will attend the doctors to see if I am able to lose weight without spoiling my health. If can do it, I will drop weight to make this fight for sure. All I want to do is just fight him because words won’t make him change. He’s mentally sick, we’re completely different people. I am a family guy. I respect my father, mother, wife, I treat my friends well, without pulling their legs, and I don’t take drugs.”

“Bigfoot” Silva last saw action at UFC 160, where he fought for the UFC heavyweight title in a rematch with Cain Velasquez (12-1 MMA, 10-1 UFC). Unfortunately for Antonio, the result was the same as in their first contest, with Velasquez earning a quick TKO finish over the Brazilian.

“Bigfoot” now has his eyes set on the pot-smoking, power-puncher, Thiago Silva (15-3 MMA, 6-3 UFC), who is coming off a KO win over Rafael Cavalcante at this past weekends UFC on FUEL TV 10 event.

The former friends (Thiago and Antonio) used to train together at American Top Team, but that time spent together seems to be long forgotten.

Thiago told media members at last Saturday night’s post-fight press conference that he would gladly entertain a fight against the larger foe, but only if Silva was able to drop the necessary baggage and come down to his world.

Do you think “Bigfoot” has any chance of making 205lbs? Let’s hear it Penn Nation!