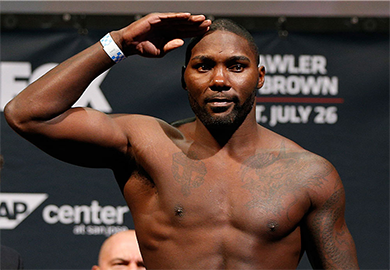 Anthony Johnson is on a crash course with light heavyweight champion Jon Jones if everything continues on the path it’s going.

After defeating Phil Davis earlier in summer, Rumble continued his tear of the 205 pound division by knocking out Antonio Rogerio Nogueira in July.

He spoke with MMAJunkie about his hope for fighting Ryan Bader and then Alexander Gustafsson.

“Hopefully I’ll be able to fight in late October or something like that if there are any fights open,” Johnson recently told UFC.com. “I was hoping I could fight Ryan Bader in late October and fight Gus on the Jon Jones card. That’s my idea.

“People finally want me to start calling people out, you know what I mean? I never did that before. But I’ve always wanted to fight Ryan Bader because I’ve always thought he was a tough fighter.”