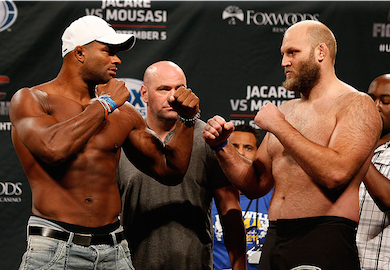 Despite expressing his dislike for Alistair Overeem as a training partner, Anthony Johnson did defend Overeem’s performance against Ben Rothwell this past Friday at UFC Fight Night 50.

He spoke with Ariel Helwani on The MMA Hour:

“To me, he looked faster and he looked stronger. He started fast, but I think he always starts that way and then he gets too comfortable. A lot of people are saying he got knocked out. That wasn’t a knockout. When you get knocked out, you just drop. He got hit in his temple and it messed him up. So it wasn’t like he got knocked out cold. He just got caught, got surprised, and that’s what happens all the time in MMA.”

“He’s still one of the top heavyweights in the world, in my opinion. I don’t think they are going to get rid of him. He is still going to sell tickets. People either want to see him win or to lose. It’s not like when Anderson was fighting or when GSP was fighting and when Chuck was fighting. People wanted to see those guys dominate somebody. With him (Overeem), they want to see him almost get beat up now because of the things he’s done or said, or whatever he got caught up with and stuff like that. He just changed people’s view of him.”

Overeem has won one fight in the last 3-years, and many believe that he needs to drop down to light heavyweight. If Overem does drop to 205, would you want to see him fight Anthony Johnson?