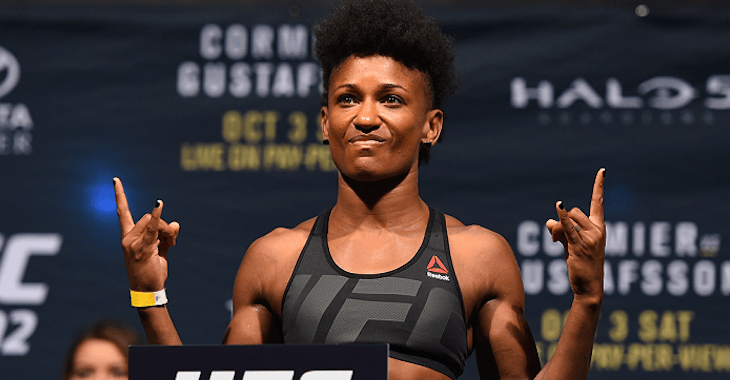 Strawweight Angela “Overkill” Hill has been released by the UFC following two consecutive losses to Tecia Torres and most recently Rose Namajunas. The TUF 20 veteran won her UFC debut match against Emily Kagan in the Ultimate Fighter 20 Finale via unanimous decision, but failed to pick up a win since.

Hill released a statement on Facebook regarding her cut from the UFC:

“Last year in April I had my first MMA fight. 2 days later I flew out to Vegas and tried out for The Ultimate Fighter. It’s been a roller coaster ride and I proved to myself how strong I could be through the shittiest situations. After 2 losses to top 5 ranked opponents I got the call that I’ve been released from the UFC. It’s bittersweet, but I’ll hopefully be able to stay more active outside the octagon and gain the XP I need to make my way back to that belt.”

Do you think Hill will be able to collect some wins outside of the Octagon and make a comeback to the UFC? Rally behind Anglea “Overkill” Hill in the comment section below!