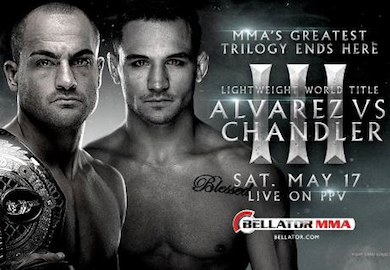 MMA’s latest trilogy will occur on Saturday, May 17th as Bellator Lightweight Champion Eddie Alvarez will defend his title against Michael Chandler in one of the most highly anticipated fight of 2014, live on Pay-Per-View. Location and ticket information will be made available shortly.

“These two warriors have produced the two best fights I have ever seen, and on May 17th, two of the greatest lightweights on the planet will close out the best trilogy in MMA,” Bellator Chairman & CEO Bjorn Rebney said.

“I’m excited to be headlining the first Bellator Pay-Per-View, and just excited to get back in there,” Chandler said. “I’m going to bring the fight like always, and I’m not going to leave any doubt that I’m one of the best lightweights in the world. Whenever you suffer your first loss, you want that chance to avenge that defeat, and I have that opportunity on May 17th.”

“Like every fight, you are only as good as your last performance,” Alvarez said. “I always go out and try to put out the best performance possible, and that’s what I’m going to do May 17th. Mike and I have a long history together, and everyone knows what type of battles we’ve had, but I’m training in a manner that should end the fight quickly. I want a fast, quick fight that is going to keep me as Bellator Champion.”