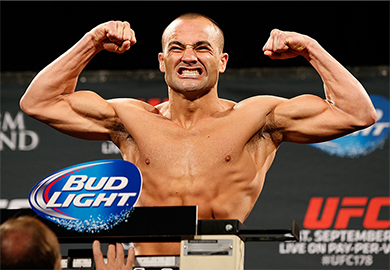 Eddie Alvarez is set to make his UFC debut tonight at UFC 178 in the co-main event against Donald Cerrone.

Ahead of the bout, Alvarez feels that many are counting him out, and he plans on putting on a spectacle on the big stage tonight.

“They only go for what they’re comfortable with, they never look outside the box. They don’t look at a guy like me and then go look at my fights and go, ‘oh, this is a good style match-up, actually.’ They go, ‘Donald Cerrone is very popular! Donald Cerrone is the guy with the cowboy music and s—!’ They just love him, and they assume I ain’t got a shot in the world.

“When I fight guys who are really dangerous, when I fight on a big stage and there’s a lot of eyes on me, I step up. I always have in the past. I always step up. I don’t know if it’s my inner show-off, or what it is, but I step up and I step up in a big way. I move in ways that I don’t even know I’m capable of, and that never goes good for my opponents. Man, I’m looking forward to feeling that.”

The former Bellator MMA lightweight champion was ranked surprisingly low in the UFC’s lightweight rankings upon his signing, coming in at #14.

Do you think he will be able to best Cerrone tonight?