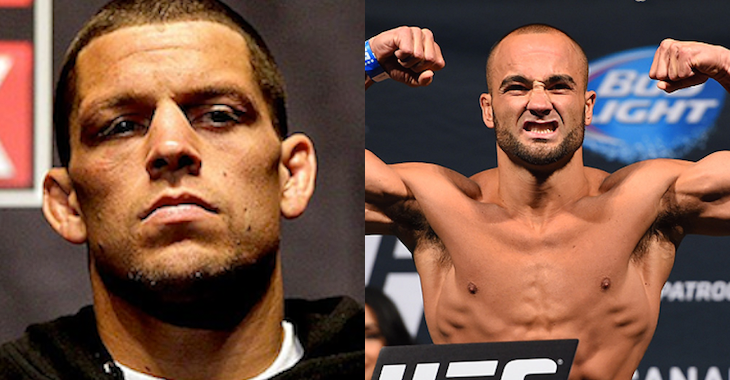 Eddie Alvarez walked out of the octagon in Mexico City, Mexico with his hands held high as he fought for and earned a tough split decision win. An argument could be made for either Alvarez or Gilbert Melendez to win the fight, but Alvarez is already looking forward to his next opponent.

Nate Diaz bashed Eddie Alvarez after his fight with Melendez and sent out a challenge.

Alvarez explained on the MMA Hour that he thought he had a good relationship with the Diaz Brothers. However, that all changed at the UFC 188 weigh ins when Alvarez had an altercation with veteran Nate Diaz.

“When I went there to Mexico, Nate just kind of changed his tune completely,” said Alvarez. “I guess that’s how he is when you’re fighting one of his teammates. I get it. He takes this sh*t personal, he takes it serious. I get it, but I thought it was kind of weird.”

When Alvarez confronted Diaz after the weigh ins, Diaz simply responded, “F*** you.” Alvarez then responded, “If you’re really gonna be like that, then you’re f*****g next.”

When asked if it was a bout he would seriously consider, Alvarez shared that he thought it would actually be a step in the wrong direction for his career. However, if he was sent a bout agreement he would sign it.

“He’d honestly be a step backward right now and considering he hasn’t really been active it just wouldn’t make sense,” Alvarez said. “I never pick fights. If I get a bout agreement in the mail, I’ll sign it. I’m just letting you know that.”