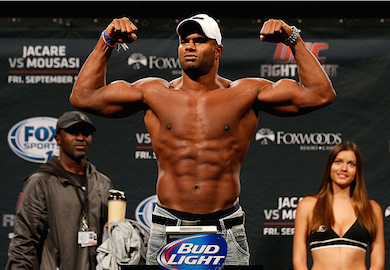 A heavyweight slugfest has been added to December’s ‘UFC on FOX 13’ event, as UFC officials announced yesterday that former Strikeforce heavyweight champion Alistair Overeem will square off with Stefan Struve when the octagon returns to Phoenix, Arizona.

Alistair Overeem (37-14 MMA, 2-3 UFC) was last seen in action just two weeks ago at “UFC Fight Night 50”, where he suffered a knockout loss to Ben Rothwell in the evenings co-main event. The loss marked “The Reem’s” third in his past four fights, with his lone win in that time coming over Frank Mir via decision.

Meanwhile, Stefan Struve (25-6 MMA, 9-4 UFC) was expected to make his long-awaited octagon return at July’s UFC 175 event in Las Vegas. Unfortunately for fans of “The Skyscraper”, Struve nearly fainted in the locker room prior his fight with Matt Mitrione, forcing UFC officials to scrap the fight as a precaution. Struve’s last UFC appearance saw him suffer a knockout loss to Mark Hunt at March of 2013’s UFC Fight Night event in Japan.

UFC on FOX 13 takes place December 13 live from the U.S. Airways Center in Phoenix, Arizona. The main card is set to air on FOX with the prelims showing on FOX Sports 1.

Who do you have winning this heavyweight clash? Sound off Penn Nation!